China International Import Expo – CIIE, was established last year and has already established itself as the most significant fair in all of China. It will be held this year from 5-10. November 2019 and will bring together representatives from more than a hundred countries.

Although China is known for organizing highly attended fairs, CIIE stands out easily. Among other things, the fact that it is the only fair intended solely for import into China. The CIIE also emerged as an expression of the desire to further promote and harness the Belt and Road initiative. Also, the fair is supporting businessmen from China and other parts of the world to get to know each other, to connect and create opportunities for further cooperation. Given that current estimates are that China will import $ 10 trillion worth of goods over the next five years, it is no wonder that the exhibitors’ seats at the fair are selling out at high speed. 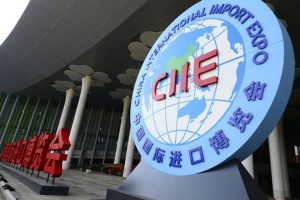 The CIIE is so significant that some countries have already signed multi-year contracts with CIIE  organizers to reserve their spots years in advance.

Last year’s fair exceeded expectations and gathered more than 800,000 exhibitors and visitors. While $ 50.8 billion worth of deals were contracted at the fair itself. Although the achievements of last year’s fair are admirable, this year’s fair looks likely to be even better. For starters, the exhibit space itself has been increased by 30,000m2 and now totals 330,000m2; 3000 companies have been registered, including 250 Fortune 500 companies.

The added value of the CIIE is that along the way numerous other meetings will be held such as B2B meetings, high political and diplomatic meetings, the presentation of tourism potentials of different countries, innovations.

Just like last year, this year our company representatives will be at the most important fair in China, where they will exchange experiences on doing business in the Chinese market and opportunities for further business development in this powerful market.

Applications for exhibitors are closed.

Applications for visitors to the fair are open and made through the representative office of the Croatian Chamber of Commerce in Shanghai.